+358 10 5011 501 This email address is being protected from spambots. You need JavaScript enabled to view it. Online Booking CHAT at the bottom Feedback at the bottom
Meeting Park is open 24/7. | We are a COVID-19 safe environment. Read more..

Not only spaces, but unique service - in total confidentiality - the only in Finland! 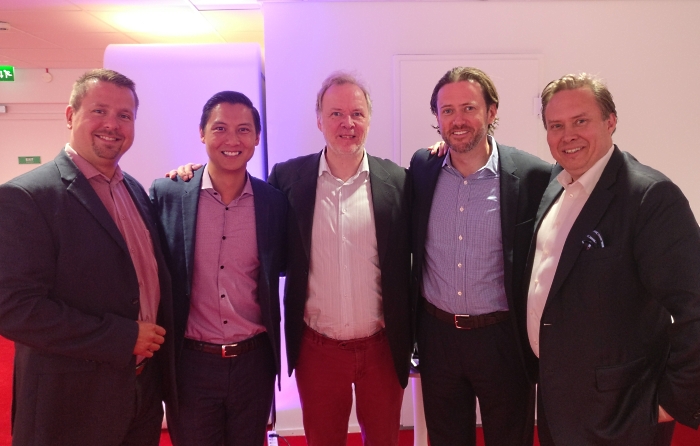 The key topics focused on business, financial and technology perspectives to become growing global actors and to identify concrete joint investment portfolios. Highlighted by Forbes and many others, Sherpa Capital is a very successful San Francisco-based venture capital firm that is co-founded by Shervin Pishevar in March 2013. Sherpa Capital is an investor in companies such as Uber, Airbnb, Munchery, ipsy, Shyp, Stance, Rent the Runway, PillPack, Doctor on Demand and Cue Health. Scott serves on the Board of Directors of Curology, ipsy, Luka, and Shyp.

Mr. Scott Stanford has been focused on the Internet and technology sector for over 20 years as an advisor, operator and investor. Prior to co-founding Sherpa Capital, Scott co-headed Goldman Sachs’s Global Internet Investment Banking business based in San Francisco. In his twelve years at Goldman he advised clients on $80 billion of equity and debt financings and strategic transactions and was deeply involved in making approximately $1.6 billion of principal investments in companies like Facebook, Uber, DST/Mail.ru and LinkedIn. His client coverage responsibility included companies such as Facebook, Google, Yahoo, Groupon, Zillow, Airbnb, Uber and many other established and emerging technology-enabled companies. Prior to Goldman, Scott was an early employee of LookSmart, where he helped build the company from a start-up to a publicly traded NASDAQ company. During his tenure he held several technical, product, financial and strategic management positions including running eCommerce, Product and Development, Strategy and Corporate Development and Business Development.

Mr. Brian Yee is a Principal at Sherpa Capital since 2014 and focuses on investments in mobile, consumer and enterprise software. Brian currently sits on the board of Do.com, and serves as a board observer on Brandless, Beyond Games, Cue, Wag and Zendrive. He has also been involved with the firm’s investments in Airbnb, Hyperloop One, Munchery, Pillpack, Stance and Uber, among others. Prior to Sherpa Capital, Brian was an investment professional at General Atlantic, a $20 billion growth equity firm, where he focused primarily on mid-to-late stage growth investments in internet, software, digital media and business services. During his tenure, Brian helped to execute and support the firm’s investments in Box, Appirio and Altair. Before joining General Atlantic, Brian started his career at Goldman Sachs, where he worked for 5 years in both the Investment Management and Investment Banking divisions. While in Investment Management, Brian was a member of 8-person investment team managing $4 billion in AUM for high net worth families, foundation and institutions. In 2010, Brian joined Goldman’s investment banking group where he advised public and private companies in the technology sector on M&A, capital structuring and financing decisions. During his time there, Brian executed 8 transactions including Uber’s Series B investment, Workday’s IPO, Intel’s acquisition of Telmap, Intuit’s acquisition of Demandforce and LAM Research’s acquisition of Novellus Systems. Brian is a graduate of Georgetown University and worked as a congressional intern for Senator John McCain.

Business Meeting Park assisted in preparing the the roundtable’s and the week’s agenda. Meeting Park is the fastest growing privately-owned Business Meeting & Office Park in Finland. The company offers a wide range of meeting, conference, training and office facilities, as well as related business services at the very best locations - 24/7. From 2016, Meeting Park has also provided highly confidental exclusive business services - like match-making, partner search and networking servives for domestic and international organizations.